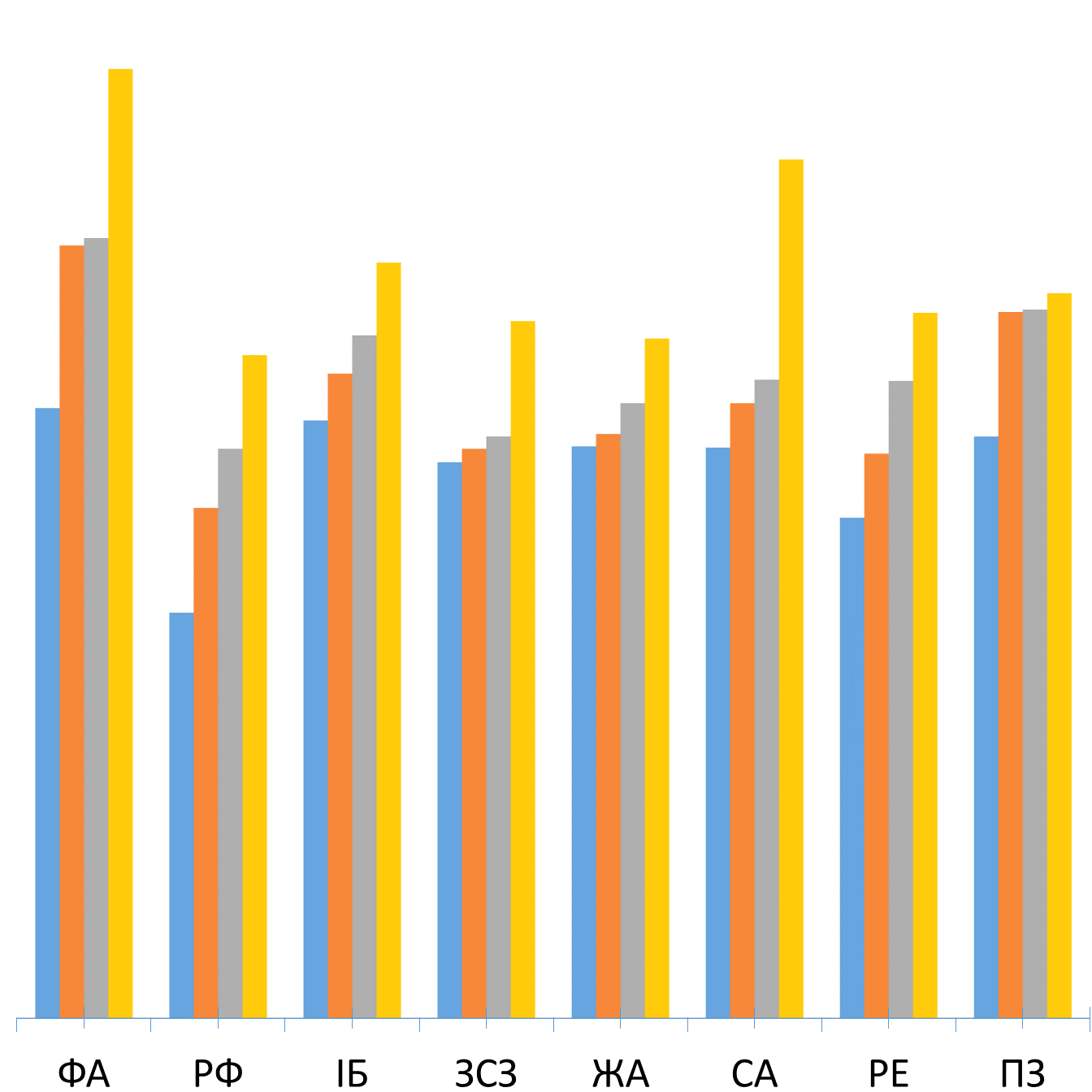 Nowadays close attention is focused on comorbid conditions that have inter-compatible course, provoke exacerbations, and prevent the full remission onset, leading to the development of more severe complications. Overlapping influence of comorbid pathology is causing the worsening in functional capabilities of the body, which leads to the patient's lifestyle worsening, initiates problematic social adjustment and decreases quality of life (QOL) 1,3,4.

According to the WHO recommendations, quality of life is defined as the ratio of the individual man's position in society with his objectives, plans, capabilities and general level of insecurity 1,2.

Patients functional capacity assessment in Ukraine remains problematic, while in Europe and the US evaluation of functional decline in patients with rheumatoid arthritis (RA) is an essential routine diagnostic procedure, as it allows to assess the disease’s impact on QOL 6.

The QOL is influenced by several factors: physical, mental and emotional state, the degree of financial independence, socialization level, social provisions, the environment 5,7. Most people, whatever disease they have had, are set up to continue their living, improve its quality and ability to adapt to the manifestations of their illness, as well as to feel comfortable in this circumstances. Therefore, along with one of the main tasks of the physician in the patients’ management, there isn’t only the task to achieve clinical and laboratory remission and prevent disease progression, but also to improve well-being and QOL 2,8.

Objective. To investigate the impact of different medications on QOL in patients with RA and hypertension.

After obtaining informed consent, in the study were included 89 individuals with RA and hypertension (25 males and 64 females, aged from 30 to 65 years). Hypertension assessment was conducted according to European Society of Hypertension (ESH) and the European Society of Cardiology guidelines. The diagnosis of RA was established based on the diagnostic criteria for RA (ACR / EULAR, 2010) that had been originally created by the American College of Rheumatology ACR in 1987.

The study had non-randomized design. All patients were divided into three groups, based on survey data, depending on the degree of RA activity and the type of rheumatoid arthritis.

The first group comprised of 32 patients with Disease Activity Score (DAS28) < 5.1) who received methotrexate at a dose of 7.5 mg per week and in the acute phase - corticosteroids in the initial dose 15,0-20,0 mg with gradual reduction by 2.5 mg per week and remained on the maintenance dose of 2.5-5.0 mg by the end of the study.

The second group included 30 patients who had 3rd degree of RA activity (index DAS 28 > 5.1), who had no contraindications to the appointment of infliximab. They received methotrexate at a dose of 7.5 mg per week and intravenously infliximab at a dose 3 mg/kg through infusomat at baseline, after two weeks, then after six weeks and after eight weeks for six months.

All patients included in the study for the treatment of hypertension treated with a combination of amlodipine - 5.0 mg and lisinopril - 10.0 mg per day.

The control group consisted of 20 healthy individuals aged from 30 to 65 years.

In this study, the patients’ quality of life was assessed using standardized nonspecific questionnaire SF-36 (Medical Outcomes Study 36-Item Short-Form Health Status), which was filled out by patients manually before treatment and at each subsequent visit. The questionnaire SF-36 consists of 36 questions, grouped into the following eight scales that allow to evaluate such QOL components as social status, mental health, and general well-being:

The physical status of the patient is evaluated by four scales (PF, RF, BP, GH) and psychosocial - also by four scales (VT, SF, RE, MH). The maximum value for all subscales in the absence of limitations or health problems is equal to 100. The higher the index for each scale, the better the QOL in this parameter.

Significant inhibition of PF in the first group of patients, compared with those of healthy individuals, was due to limited opportunities in performing their daily activities. This state, in turn, led to a decline in the RF and RE, i.e., the patient’s physical inability initiated the occurrence of problems in the emotional sphere.

On the second and third visits during treatment, patients’ performance in all QOL subscales had increased but didn’t reach the level in healthy individuals. The between group differences were still statistically significant (p <0.05).

When comparing the quality of life of patients of the second group (Fig. 2) with QOL in healthy individuals at the first visit, it was found that the presence of pathology had increased QOL scores in all subscales. These scores reflect patients’ physical condition and psychosocial status.

In the second visit during treatment, all of studied QOL parameters had significantly improved. By the third visit, scores had progressively increased in all scales and almost reached the performance in healthy individuals.

QOL analysis in patients from the 3rd group (Fig. 3) had also demonstrated significant decline in all subscales when compared with control group. During repeated assessments, there was demonstrated an increase in all QOL subscales that reflects improvement in patients’ physical condition. Alongside was recorded and improvement in psychosocial QOL component scales but even on third visit intergroup differences, compared to healthy individuals, were still statistically significant (p <0.05). QOL physical components, assessed by PF, RF, BP, and GH subscales were 1.86, 1.72, 1.26 and 1.23 times lower and psychosocial subscales, including VT, SF, RE, and MH, were lower by 1.32, 1.21, 1.20 and 1.26 times respectively.

Comparative analysis had demonstrated significant intergroup differences between 2nd and 3rd groups (Table 1). On the first and second visits, QOL scores from all subscales in third group compared to the second group were lower. The same was noted and for third visit, but in this case, differences were more pronounced. As a result on this visit QOL PF, RF, BP, and GH physical subscales in the second group were lower by 1.79, 1.58, 1.22 and 1.21 times, respectively, and VT, SF, RE, and MH psychosocial subscales were lower by 1.24, 1.13, 1.19, and 1.24 times, respectively, compared with the third group. Differences were statistically significant in all cases (p<0.05).

Thus, we can assume that the variability of quantitative QOL components, manifested by changes in SF-36 questionnaire subscales, reflects the impact of RA and hypertension on the subjective perception of the disease by patient and his capabilities for dynamic adaptation to the present condition. These circumstances can make some adjustments in the course of illness and the treatment effectiveness that should be considered upon patient management. This is especially true because of QOL association with comorbid diseases dynamics and treatment effects. QOL assessment in patients with RA and hypertension allows to retrieve additional information about the illness, which increases the objectivity of therapy dynamics.

In this study was demonstrated that psychological component of QOL is, to a large extent, dependent from physical parameters that may indicate the need for inclusion of psychological interventions into the differentiated individualized treatment plans.