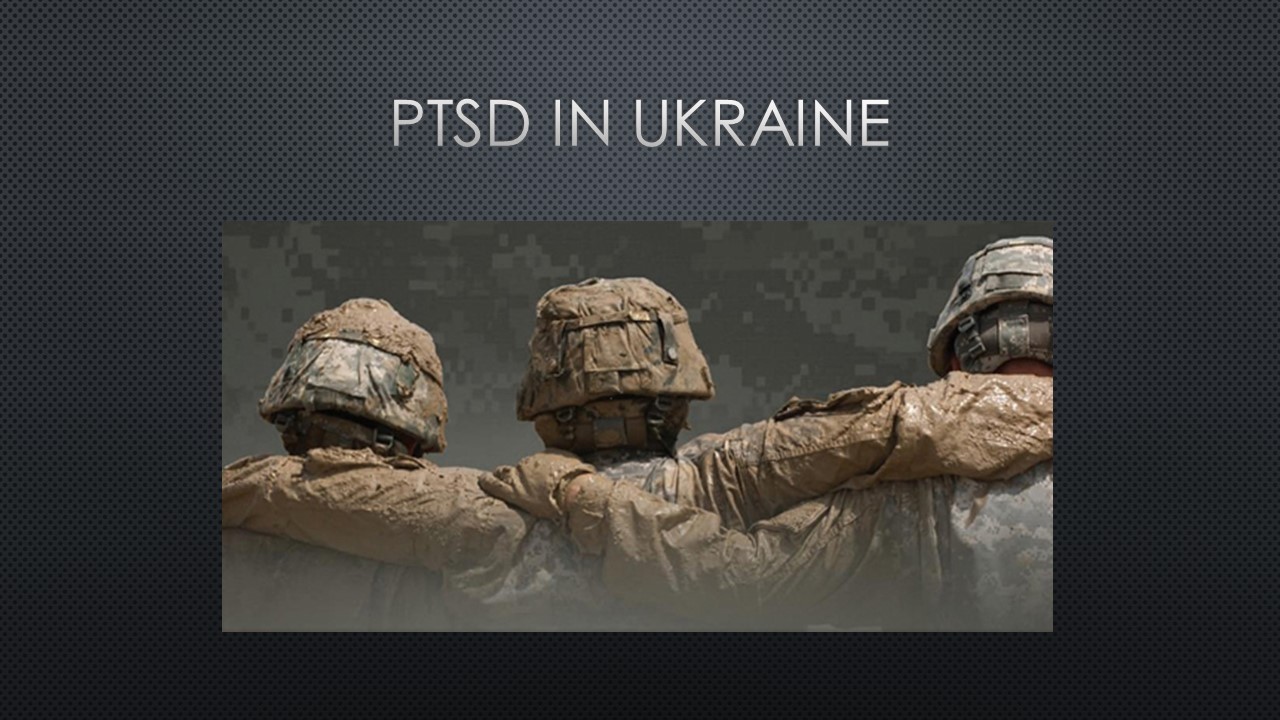 My first encounter with PTSD happened in the fourth year of medical school when we were studying military internal medicine. In the USSR every doctor had to have training as a military doctor. In a practical class, I was given a patient – a man who was a military pilot in World War Two, who had insomnia and hypertension. He complained of an inability to sleep because the moment he closed his eyes – he found himself in his fighter plane in the middle of an air battle, he and a friend are trying to make their way through a squadron of the enemy trying to escape pursuit. While listening to him, it was difficult to determine what he was feeling in the moment - fear or pride. At that moment I had a feeling of being at a political meeting with a hero of the Soviet Union.

The diagnose of post-traumatic stress disorder is absent from the many USSR medical books from that period, for example, “The experience of Soviet medicine in the Great Patriotic War of 1941-1945” 1. Mental disorders with similar symptoms are classified as “psychogenic disorders of wartime and the dynamics of different forms of psychopathy.” In traditional Soviet psychiatry psychogenic disorders were considered a form of hysterioform reactions. The entire machine of psychiatric and psychological help was programmed towards ideological work with the people. This is reflected most fully in a quote from Alexander Lurya “While in peace time the main aim was to fully study the patient and determine “the smallest functional and organic changes in the body” to prevent disease, in war time, when we are essentially talking about a healthy person, who has undergone the trauma, the task is in establishing how quick the wounded or ill soldiers can return to the ranks of the army, to general or special duties, in service of the country in the awe inspiring and formidable years of the Great Patriotic War” 2.

A psychologically suffering person did not fit into Soviet society, and after the war, disabled veterans were forcibly removed from the streets so that nothing would overshadow the “great victory.” If one didn’t die for the good of the Motherland, one was supposed anyhow to sacrifice one’s life for the good of the future generations. However what happens with compassion that cannot be expressed openly? What happens to the grief that cannot be spoken of? Sigmund Freud in his work “Remembering, repeating, and working through” (1914) states that past trauma that is inaccessible to remembering and thinking through will inevitably be reenacted in the present and thus repeated in the future 3

Let us turn to the history of Ukraine, particularly to take into account that territory of Ukraine has experienced the difficult heritage Ukraine suffered the of the humanitarian disasters of the 20th century. The string of traumatic events was uninterrupted; it included the war of the first Ukrainian republic with Soviet Russia between 1917 and 1920, the uprising in Holodniy Yar in the middle of the 1920s, and the starvation (Holodomor) created by Stalin’s regime. There was also the tragedy of the Babiy Yar as well as the fact that Ukraine suffered the most in the second world war and was under occupation for over three years including the frontline’s movement over its territory, and the war in Western Ukraine (1944 -1954). This is the reason why after the collapse of the Soviet Union the central idea, around which Ukraine constructed its state and national identity, was that of a victim being persecuted by imperial nations – first and foremost Russia, but also Poland, Austria, Germany. And this is both good and bad; on the one hand it corresponds to the real state of things and can open the way for remembering, on the other hand it excuses resentiment from the perspective of social psychology, it worth to point here the “boomerang effect” 4 when the new technologies of power tested out in the colonies, are inevitably turned against the empire itself.

Alexander Etkind in his historical and psychological study “Warped Mourning. Memory of the unburied” writes: “In Eastern Europe, the memory of communist terror is active and present everywhere, as well as the memories of the Second World War…the Soviet regime collapsed forty-five years later than the Nazi regime and in a very different scenario. In this part of the world, the tragic histories of the socialistic past and the war have split society much more profoundly than economic and political problems of the present 5.

PSTD in participants of the anti-terrorist operation

Because there has been a military conflict called the anti-terrorist operation in the Donetsk and Lugansk regions since April 2014, it seems relevant to examine how combatants adapt after being demobilized, and the militarized mindset affects further social development. Apart from the losses on the battlefield, there are increasingly frequent reports of “non-combat” losses that do not take on clinical forms but rather appear in the form of other behaviors.

According to the statement from the Ministry of Internal Affairs of Ukraine, “Based on the data of the Military Prosecution Office as of early June 2017, there have been roughly 500 suicides registered among the participants of the anti-terrorist operation after their return from the conflict area. According to the information provided by the “La Strada” human rights center even in 2015, the number of family members of ATO participants that sought help from the organization has increased eight times”. We are talking about a growing problem of post-traumatic stress (PTSD) in veterans of the ATO.

Therefore the following questions remain both timely and yet unanswered:

What is the reason that such institutions provide the data on PTSD as Ministry of Internal Affairs and the military? Why aren’t the ATO participants assessed and studied by the Ministry of Healthcare?” Maybe a special method of study is required to study the symptoms of PTSD in Ukrainian veterans. Do the history and the heritage of the Ukrainian people affect the course of PTSD? What is the optimal course of rehabilitation the ATO combatants?

The volunteer psychological service between Mach 2014 and July 2016 interviewed hospitalized soldiers, who were in medical departments in the city of Odessa. The volunteers recorded the conversations they had with the soldiers which were subsequently analyzed in supervision groups. Each specific case was discussed taking into account the particular experience of trauma, as well it’s clinical form, the social and cultural context. In the course of systematically organizing the records, we tried to assess the repeating behavioral patterns of the combatants of ATO by the psychodynamic analysis of counselling records.

The volunteer psychological service gathered the clinical material that is the basis of the conclusions formulated hereunder. This service worked at:

Over the period between March 2014 and June 2016 volunteers counselled 163 combatants. Each counselling session was recorded.

It was noted that the patients from the somatic departments were establishing the contact quite readily. However, after discharge from the hospital, they practically never seek out psychological help.

Based on the interviews’ records we were able to separate out the following behavior patterns that affect the course of PTSD in ATO combatants:

Thus a logical question arises: how far does the ideology affect the development of PTSD? Possibly indirect evidence of such a brave hypothesis can be seen in the fact that PTSD as a separate disorder was described in Vietnam War veterans – a war that in the eyes of the American public was judged to be a useless evil. The observation made by Freud also supports this; he emphasizes that the only factor that determines the psychological aftermath is the subjective assessment of the danger involved by the individual, and “whether he was right or not, does not matter to the result” (1926, р.166) 6. In other words, psychologically traumatic experiences may not be seen by the individual as traumatic until he evaluates them as such. Until this has happened, the overwhelming effect that can have a destructive value on the psyche, will be split off and catexised into somatic symptoms or reactive behavioral patterns (usually, self-destructive) 7. Possibly the death instinct that Freud described based on the war neuroses of First World War, was a manifestation of this ego-syntonic living through of the catastrophic emotions, that according to the ideology of the time could not have been and were not admitted to be traumatic by the subject. Thus, the “repetition compulsion (and the contrasting fear of the repetition of the catastrophe in PTSD) are a manifestation of the subjective inability to admit the way things are. I can’t help but remember the suicides of soldiers and officers with the words “Russians don’t give up” that were glorified in Soviet films.

I would like to return to my first PTSD patient – the World War Two pilot. Unfortunately, I didn’t gather his history thoroughly enough back then, all can do is speculate that the flashbacks in his dreams started to bother him a great deal more after the collapse of the Soviet Union when the idea of the Germans’ advantage “in the air” became commonly known. It is possible that during the Soviet Union he only suffered from hypertension. Or, well, maybe only talked about the hypertension. The above thoughts lead to the thought about the need to create such conditions in society, with no political and ideological components, that would allow to fully reflect the causes and consequences of military conflict. This discourse based on general philosophical and humanistic principles can prevent the repetition of the social catastrophes and provide a buffer against a future outburst of PTSD.