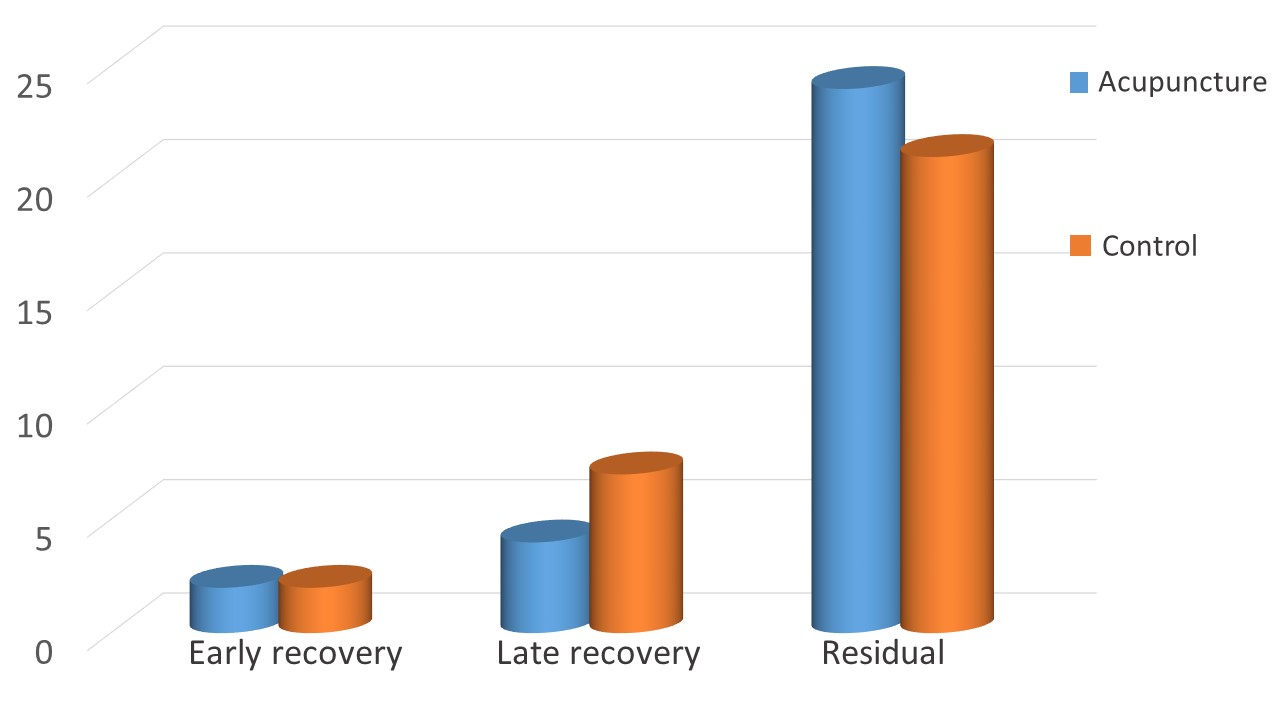 Vascular and cerebrovascular diseases remain an actual problem of modern society. This is explained by their significant prevalence, as well as high mortality rates. According to the Ministry of Health, 100-120 thousand strokes are registered annually in Ukraine, of which one third is among the working age population. In 2015, the incidence of acute impairment of cerebral circulation was 274.1 per 100 thousand population (the average rate of morbidity in Europe - 200 cases per 100 thousand population) 1, 2. The American Association of Cardiologists reported that 795,000 acute impairments of cerebral circulation are recorded in the United States in 2017 year, that is, a new stroke occurs almost every 40 seconds 3.

According to Harrison R.A., more than 70% of patients with a stroke feel pain every day. Pain genesis is quite varied: pain in the shoulder joint, pain in the paretic limbs due to distinct spasticity, central or thalamic pain, myofascial and vertebral pain, headache, etc. 4.

According to the literature, headache in the acute phase of stroke occurs in 27-31% of patients, in the remote period - much less (3.5-11.0%). Overall, about 11% of patients had reported a permanent or a periodic headache that occurred 3 months before a stroke. A headache, directly related to a stroke, is noted by more than 30% of patients 4,5,6.

It is believed that if a headache was preceded by a stroke, the probability of its appearance as a symptom after the onset of acute impairment of cerebral circulation is 20% 4,6. It was investigated that significantly more headaches were observed in patients with atherothrombotic and cardioembolic stroke. Association between a headache in stroke and hemorrhagic stroke was not detected 5.

Despite the fact that in clinical practice headache is a frequent complaint of post-stroke patients, it is not satisfactorily described in the specialized literature, and its pathophysiology has not yet been sufficiently studied. One of the mechanisms of a headache to date is the stimulation of the trigeminal vascular system. The causes are various, including lesions of the brain tissue and brain vessels, followed by inflammation or reinnervation of pain paths, and even medications. Dipyridamole with extended release, which is utilized for secondary prevention of stroke, is also among the possible causes of a headache 5, as well as changes in brain tissue perfusion, serotonin release, and prostaglandin levels 7.

In order to relieve headaches, patients usually use a significant amount of medications, often without a doctor’s acknowledgement. Because unjustified polypharmacy is ineffective and contributes to a wide range of adverse effects (increased secretion of hydrochloric acid in the stomach, cardiovascular effects, allergic reactions, etc.), the search for pathogenetically substantiated, effective alternative approaches deserves great attention. The addition to the complex therapy of non-pharmacological methods, which would contribute to the reduction of side effects and accelerate the recovery time, is relevant to the present day. Among such methods, an important role is played by methods of reflexology 8,9.

Reflexotherapy (RT) - it is a medical diagnostic system that includes a complex of various ways of influencing the acupuncture points (AP) and zones of the body through the skin, musculoskeletal and nervous movements with a sanogenetic purpose. Clinical experience proves the high efficiency of the therapeutic effect of reflexology in patients with organic lesions of the nervous system, in particular in the case of stroke effects 9,10,11. Many studies have shown that due to the effect that begins with the stimulation of the receptor apparatus in AP develops a complex cascade of neuroendocrine reactions, which, in addition to the peripheral, extends to the segmental and supra-segmental levels of the nervous system. RT affects nociceptive and anti-nociceptive systems due to indirect stimulation of secretion of opioid and non-opioid peptides (vasopressin, oxytocin, neurotensin, etc.) 9,10,11,12,13,14,15.

In modern reflexology most often are used corporal classical acupuncture (acupuncture), auricular therapy, and scalp therapy. The place of influence is the point of acupuncture (TA) - the area of soft tissues of the body, which is anatomically and physiologically different from the surrounding tissues.

The effectiveness of acupuncture is controversial. Also it was a subject to extensive studying, acupuncture’s evidence base remains low. In this study the acupuncture effectiveness as evaluated as a part of complex rehabilitation of post-stroke. The main hypothesis is that the use of this method can contribute to disability reducing and quality of life improving.

Aim: to evaluate the effectiveness of reflexology, in particular, acupuncture, in the complex treatment of a headache in patients after stroke.

To solve this goal, we analyzed the parameters of 2 groups of stroke patients suffered from a headache: acupuncture group (n = 30, acupuncture with traditional medication treatment) and control group ( n = 30, only medications).

Most of the patients had ischemic stroke type (Fig. 1).

Regarding the distribution of patients by the period of the stroke (Fig. 2), the largest number of participants were recruited at the residual stroke period. Only small amount of patients had early stroke stage at the baseline.

Reflexotherapy, in particular, acupuncture, was performed daily, the number of sessions on average was 8-10 procedures, the average duration of the procedure per patient was 40 minutes. In order to increase the effectiveness of the effect, we proposed the modification of the method, which included a combined effect on the microsystem (ear, scalp area, brush area, foot, and abdomen) simultaneously with corporeal acupuncture.

Statistical data were processed according to Student's criterion for dependent and independent samples using the statistical package "Microsoft Office Excel 2007" and "Statistica for Windows 6.0".

The effectiveness of the applied effect on the manifestation of a headache was assessed in the dynamics in the main (Table 1) and control (Table 2) groups, after which the performance indicators of treatment were compared in groups among themselves.

Analysis of the results of treatment of patients in the main group showed that complex therapy with the use of acupuncture allowed to obtain a positive effect on the three characteristics: the intensity, duration, and nature of pain. In addition, there was a tendency to affect D crtiterion (localization, p = 0.07), which is logical, since the reflexological approach itself, besides the general, suggests a specific topical effect on the zone of pain manifestation. The indicator did not reach the level of significance but equals 0.07, which means a "tendency" for change (p <0.1). It can be speculated that the bigger sample and follow-up period will give enough statistical power to make the difference significant.

As a result of the statistical processing of the control group indices, for the Student test for dependent samples, the following data were obtained (Table 2).

So, as can be seen from the statistical calculations presented in Table 2, it has been proved that traditional drug therapy significantly reduces a headache in poststroke patients (p <0.05) only in two indicators - intensity and duration. However, the effect of treatment on the nature and localization of a headache was not significant.

Comparative statistical estimation of treatment of patients in two clinical groups showed that the use of acupuncture in the complex treatment of a headache in poststroke patients was significantly (p <0.05) positively influenced the manifestations of a headache compared with the control group for 4 criteria: intensity, duration, character, localization (Table 3).

Thus, as shown in Table 3, the effectiveness of acupuncture in the complex treatment of a headache in patients after a stroke is significant in compare to medications alone. In addition, we have received interesting results that refer to the age and sexual aspects of the patients being studied. Consequently, in a correlation analysis of age and gender, it was found that a headache was more intense in female subjects (R = 0.34); there was a reverse correlation between the severity of pain and age of patients (R = 0.39), which is consistent with the findings of other researchers 4,6. The complaints on a headache were less pronounced in more older age group and vice versa, the younger age was associated with more pronounced headache intensity, which may be explained by the exhaustion of the nociceptive system as a result of both acute and chronic cerebral ischemia in older people 4,19.

Thus, by analyzing the dynamics of therapeutic effects of reflexotherapy on a headache in post-stroke patients, the following conclusions can be drawn:

Thus, the use of reflexotherapy in the complex treatment of post-stroke patients allows to significantly reduce the headache that can lead to improvement of qulaity of life and increase the effectiveness of the rehabilitation; these results outlines the prospects for further researches on reflexotherapy effects in this group of patients.

The authors declare that no competing interests exist.